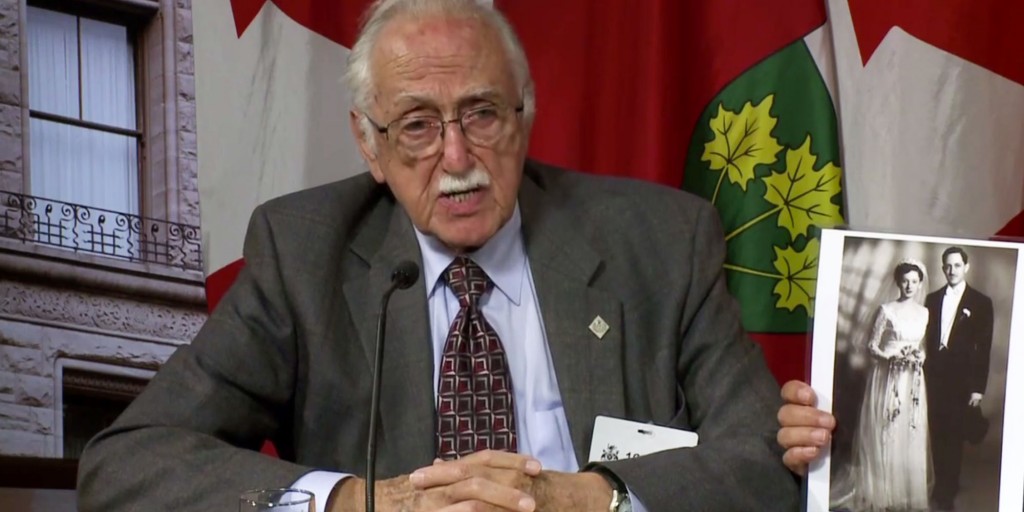 Morris Adams is ninety-one years old and a living example of a senior’s worst nightmare, “out living his money.” Morris’s problem is the tip of a financial iceberg faced by so many Canadian seniors.

Morris is still working doing tax returns for clients and looking after his wife of sixty-seven years, Ruth, who suffers from dementia. Morris takes care of her at home with the help of in-home-care, but the cost of the care has brought him to the brink of outliving his money. He has gone through $200,000 in savings (about $35,000 a year for home care) and all he has left is $500,000 in term life insurance.

Morris, like many seniors, is insurance rich but cash poor because his policies have no cash surrender value with the insurance companies. So a few months ago he came up with an idea.

He said, “At ninety-one, I don’t have much time left and when I die Ruthie will get the half-million, but we need the money now, at least some of it.” So he talked to his insurance company and proposed that they give him half the value of the insurance now and he’d surrender the policy so they’d end up paying only half the death benefit. But the insurer wouldn’t do it, not unless they had a doctor’s certificate stating Morris’s life expectancy. Of course, he was reasonably healthy at the time so his doctor couldn’t make such a statement.

Across Canada, there are tens-of-thousands, probably hundreds-of-thousands, of stories like Morris’s, seniors struggling financially while owning a valuable asset, their life insurance policy, but not able to sell it for fair market value. Because under six of ten provincial governments there are regulations that prevent seniors from accessing the fair market value for their policy through a life insurance settlement, a practice that is accepted in jurisdictions around the world. Exacerbating seniors’ dilemma is the fact that organizations that claim they are advocating for seniors (e.g., CARP, Advocis) are doing nothing to look into and advance the potential for Canadian seniors to access the true value in their life insurance. Their inaction is the height of hypocrisy in action. 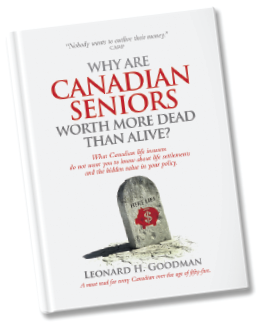 I have been advocating for seniors on the life settlement issue for five years: talking with, writing to, meeting with elected officials, government agencies, insurance companies, insurance agents, the media and advocacy groups who purport to put seniors’ best interests first. I’ve also written a book about it, Why Are Canadian Seniors Worth More Dead Than Alive? What Canadian life insurers do not want you to know about life settlements and the hidden value in your policy.

What I have discovered is that there’s a lot of talk and no action. A dumpster full of hypocrisy.

Recently, CARP (Canadian Association for Retired People) announced the appointment of a new VP of Advocacy, Wanda Morris. In an interview (Dec. 2017), she said the CARP board had agreed on their advocacy priorities for 2018, as “the sweet spot between needs and where there is potential for legislative change.”

What the CARP board does not acknowledge is the reality that life settlements are indeed a “sweet spot” that falls smack-dab in the middle of all four of their priorities, and that could greatly enhance each. For years the CARP board has ignored this most obvious fact. Why? I suggest it’s the money. Because CARP sells insurance products and makes money and insurers spend money advertising with CARP. So CARP has never inquired into the validity of life settlements (they need look no further than the United States) or questioned the insurance industry’s false claims against life settlements, they’ve simply ignored them, and in so doing, also ignored the best interests of their more than 300,000 members. I suggest that’s irresponsible. And hypocritical. Not to mention shameful.

Brokers and financial planners are on the frontlines when it comes to helping seniors and they have a fiduciary responsibility to present their clients with all possible financial alternatives when planning for old-age. But once again, we see the hypocrisy.

Despite the self-declaration of Advocis (association of agents and advisors) that “… members serve the financial interests of millions of Canadians and are committed to putting their client interests first,” the association is serving up talk without action. Advocis’s more than 12,000 members are forced to ignore–– under threat of licence termination––the potential value that life insurance settlements could provide to Canadians, which, obviously, is blatantly ignoring their clients’ best interests. I know this for a fact; I’ve experienced it. The pledge of “clients first” is actually a hedge – a false proclamation – that sounds good but falls short because they cannot make their clients fully aware of a life settlement alternative.

This brings me to the third example: the Ontario Government.

Nowhere is the maxim, “watch their feet, not their mouth” more apt then in government. Nowhere is there more talk and less action. It is so historically ingrained that public expectations are always low––and rightly so. However, if and when some government action takes place, hope springs eternal––well, at least for a short time. That’s what happened in the last few months with the Ontario Legislature. Promise and hope were rising (Morris Adams was very hopeful) and then … action died on the rotting legislative vine. And with it, hope for seniors was lost in political hypocrisy.

Bill 162, a Private Members Bill introduce by MPP Michael Colle, received second reading on Oct 19, 2017. This bill, if passed, would amend an egregious regulation in the Ontario Insurance Act that currently prevents Ontario seniors from accessing the value in their insurance policies through a life settlement. This was a long overdue action––it was last proposed eighteen years ago, in 2000. But alas, it appears that hypocrisy will once again win the day––and seniors will lose.

Michael Colle says the bill won’t pass and be proclaimed unless MPPs get behind it, and MPPs won’t get behind it if there isn’t a public uprising (i.e., many calls and emails to MPP offices), and that won’t happen because so-called advocacy groups––that’s you CARP and Advocis––are mute, ignorant and opposed to this most important issue. For no valid reason.

When it comes to the issue of life settlements, if you watch the feet, not the mouths of these so-called advocates, it becomes self-evident that self-interest is at the core of their “sweet spot,” which, in turn, generates more hypocrisy than action for Canadian seniors.